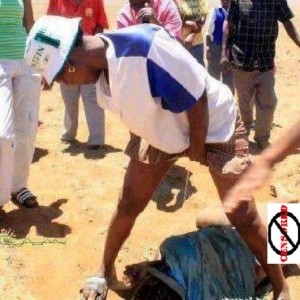 An “upcoming” actress whose identity is yet to be made known may have had her budding career already in shambles as she has taken up a role in a script which is definitely too big for her to handle.

The actress in question was said to have allegedly snatched the husband of a certain woman who, it was reported, had been patiently waiting to teach her the lesson of her life by publicly disgracing her – and exactly that is what the woman did to the actress!

The woman was said to have laid ambush for her in one of her outings, stripped her half naked and urinated on her as a sign of warning to leave her husband alone.

Meanwhile, information about the incident, which was said to have taken place in Port Harcourt, is still sketchy.