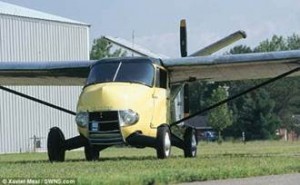 A Massachusetts firm Terrafugia is currently developing the Transition of the world’s first flying car, Aerocar. This, it is expected, could be delivered to customers by the end of the year!

Meanwhile, the prototype 1954 Aerocar is being sold by a Rockford, Illinois, based company – Courtesy Aircraft as one of only five which are known to still exist today. It is expected to sell for about £800,000 (about $1.6 dollars). Inventor, Moulton ‘Molt’ Taylor, began work on the car in 1946 and it became the world’s first road-legal flying car when he built the first prototype three years later. The collector’s item could prove to be a popular investment, although it is in need of some maintenance as its last inspection was over 14 years ago and it has not taken to the sky in quite a while.

According to the Wall Street Journal, the flying car is not missing any major parts and is still in a good enough condition to see it take flight again. With enough room to take two people up into the clouds, the 150-horsepower vehicle has a cruising speed of 100mph and a 300-mile range.

This car-cum-plane is also expected to be shown off at the New York International Auto Show in April where it will make its first public appearance. Motorists, and indeed pilots, will be able to fly for 460 miles on one tank of petrol at a cool cruising speed of 110mph.

So, where are the Nigerian millionaires and billionaires? Especially the ones who have contributed actively to ensuring that our roads remain largely “unmotorable”! they definitely will be getting their wallets ready by now. Afterall, a good number of them already own choppers while a handful of them have their own private jets!