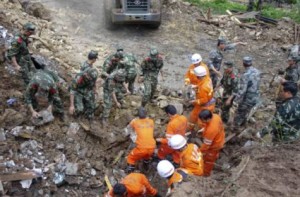 A landslide triggered by sustained rains, buried a school and three farmhouses on Thursday in the village of Zhenhe in Yunnan province, China where a pair of earthquakes last month killed 81 people and injured hundreds. The bodies of all 18 schoolchildren buried under the landslide have been recovered, media said on Friday.

China National Radio said in a report on its website that any last hopes for survivors among the children evaporated early Friday when rescuers pulled the body of the last missing child from the debris.

School safety is a sensitive issue in China after thousands of students died when an 8.0-magnitude tremor centred in Sichuan province rocked the southwest of the country in 2008.

China has a highly competitive education system built around cramming for high-stress testing that determines entry into good schools later.

Local officials in Yiliang county, which includes Zhenhe, have said the dead children needed to make up lessons lost due to disruptions stemming from the September earthquakes in the area.

In their defense as people questioned why the pupils had been brought back into the school, located in a deep mountain valley, when China was on a week-long national holiday, the county’s deputy chief said;

“The mountains around the school are covered with dense vegetation, and there were no signs of potential landslides during investigations after the earthquake.”

But domestic media quoted nearby residents saying they had been concerned about children walking long distances to school over muddy mountain paths so soon after last month’s earthquakes.

“If the students were off for holidays, there wouldn’t be this tragedy,” said a user of Sina.com’s micro-blogging service, one of many outraged postings.

“Couldn’t they just take time making up the missed classes? Officials, schools, and teachers are too eager for quick success and instant benefits. They are the the biggest killers.”