Amidst all the tribulations and tales of lamentation and anger that have been coming out of Nigeria for the past couple of days, a youth corps member with the National War College, Abuja, Dr. Pascalina Onuoha, is giving us news to be cheery and hopeful about. The Optometrist has been honoured with a chieftaincy title by the Galadimawa community, Abuja, for donating a bin for the purpose of evacuating waste.

Until she donated the N1.6m roll bin, residents dumped their waste by the road that leads to the community and were at risk of an epidemic.

For her thoughtful gesture, she was given the title, Bazhim Gbagvinu 1 (woman commander) of Galadimawa by the District head, Alhaji Musa Barde, at a colourful ceremony attended by a large segment of the community. 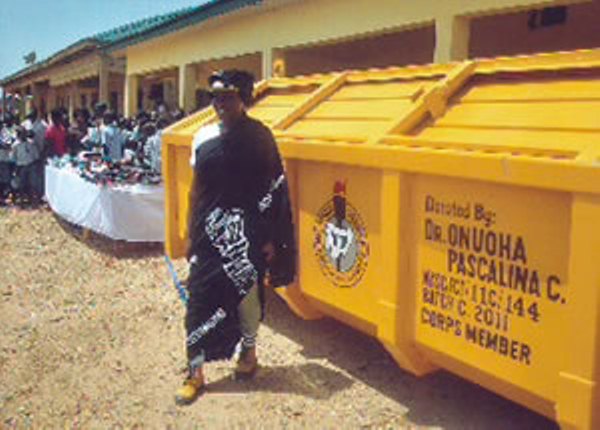 Before the bin was inaugurated, Onuoha visited the district head and explained her plan to assist his people to manage their waste in a more responsible and environmentally-sustainable way.

She also went round the community and spoke to the residents about the need to keep their environment clean and dispose their litter in a proper way.

The youth corps member told PUNCH Metro that she was motivated to donate by the unsanitary condition of the area, having observed the poor manner the residents disposed their waste.

“I discovered that the community didn’t have a proper waste management system; residents simply dumped waste at a spot by the road and this is the fastest way to provoke an epidemic,” Onuoha said.

According to her, the residents are happy about the donation because the bin has met a major challenge in the community.

Onuoha said, “With an outside broadcasting vehicle from Abuja Environmental Protection Board, I went around the community on a Saturday and enlightened the people on the need to keep their environment clean and the importance of proper waste management.

“The youths joined me to evacuate the waste into the roll bin and everyone was happy because the bin has solved a major problem of the people.”

On how she raised the fund for the bin, the Galadimawa chief explained that she got financial support from the Ecology fund office, Abuja; Chika & Co. Limited and a few other private firms also donated to the project.

The ‘woman commander of Galadimawa’ said she saw the title as a responsibility to do more for the people, adding that her future plan was to set up a non-governmental organisation through which she could touch lives.