Columbia Records said in a statement on Monday that Grammy-winning British singer, Adele had signed on to write and sing the theme of the latest James Bond film, “Skyfall”. The song will be her first to be released since her best-selling heartbreak album “21” that won her music most prized award. 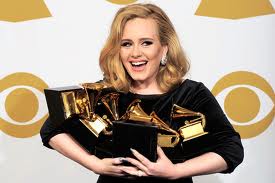 The song will be released on Friday on her official website to coincide with the Bond film franchise’s 50th anniversary and Global James Bond Day.

In a statement by the singer, she said she fell in love with the script, and hence felt compelled to write the song.

“I was a little hesitant at first to be involved with the theme song for ‘Skyfall.’ There’s a lot of instant spotlight and pressure when it comes to a Bond song,” the singer said.

“When we recorded the strings, it was one of the proudest moments of my life. I’ll be back-combing my hair when I’m 60, telling people I was a Bond girl back in the day, I’m sure.”

Singers who have performed the title songs over the past five decades include Shirley Bassey in 1971’s “Diamonds Are Forever” and 1979’s “Moonraker,” Paul McCartney on 1973’s “Live and Let Die,” and more recently, Madonna on 2002’s “Die Another Day.” Jack White and Alicia Keys performed “Another Way To Die” from 2008’s “Quantum of Solace.”

The new movie, “Skyfall” is the 23rd in the Bond franchise and the third film with actor, Daniel Craig in the lead role, and as usual, we will see the womanizing rogue super-spy take on another mission to save the world. The film will be released in Britain and most European nations on October 26, but not until November 9 in the U.S.