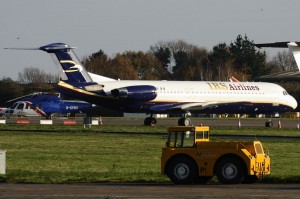 It must have been a moment of shock for those who were at the Muritala Mohammed Airport, Lagos, to witness a Kano-bound IRS Airlines plane colliding with an abandoned truck beside the taxiway on Wednesday morning, forcing the pilot to cancel the flight. Statement from the Federal Airports Authority of Nigeria (FAAN), the owners of the truck, had said that the truck, a gully emptier with registration number XT 461 LSD was on official assignment and “accidentally fell into a drainage in the taxiway ramp of GAT and could not be evacuated immediately.” This was at about 8.30 on Tuesday night (October 9, 2012),

It was the wing of the Fokker-100 aircraft that collided with the truck which subsequently fell into a drainage on Tuesday. Meanwhile, the 91 passengers on board the flight were later disembarked and put in another plane which left for Kano three hours later.

According to statement by the Managing Director of IRS, Mr. Yemi Dada, confirming the incident, “This morning our flight LVB 3306 taxied out on a Lagos to Kano flight with a transit stop at Abuja. The aircraft taxied out at 7:48am with 91 passengers. While taxing on the taxi way the Captain observed a FAAN truck in a ditch. There were no marshals around it neither was there any marking to indicate that it encroached into the taxi way. There was no Notice To Air Men (NOTAM) issued to that effect as well.

“The captain continued on his taxi and the wing tip hit a protrusion from the truck towards the rear of the truck. This made the captain request a return to ramp from the tower and also notify the tower of the incident and the danger posed by the truck… The passengers were disembarked and accommodated in another aircraft which departed Lagos at 10:15am. The incident has been reported to Nigerian Civil Aviation Authority and we await the clearance of the NCAA to effect repairs and return the aircraft to service.”