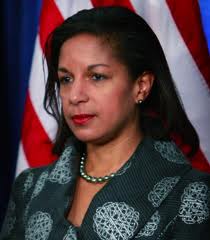 Representative of the US at the United Nations, Ambassador Susan Rice has expressed her condolence to the victims of the Mubi killings.

The American diplomat said on twitter that she was devastated by the heinous act.

“Devastated by the mass murder of students in #Nigeria today. Our hearts go out to the parents of the victims of this heinous act.”

Police believe the victims were targeted. “The attackers went to the houses of the victims, called them out by their names and killed them,” said Adamawa State Police spokesman Mohammed Ibrahim.

“They used guns and knives on the victims.” Some of the victims suffered slit throats.

“We believe this was an inside job. By God’s grace, in the next few days we will have some suspects,” he said