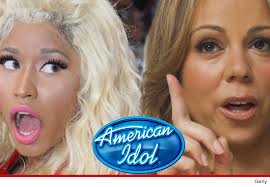 Against media reports that the American Idols auditioning had been suspended due to the fracas between judges, Nicki Minaj and Mariah Carey, new reports say there was peace and professionalism on the last set of the show.

Outward appearances at least showed that Mariah Carey and Nicki Minaj buried the hatchet and they were civil with each other during the entire day of auditions in Charlotte, North Carolina.

Sources say everyone was “embarrassed” by the outburst between Nicki and Mariah. The fact that it was captured on video and posted on the internet made it more embarrassing.

The confrontation reportedly “shocked everyone back into place. It gave birth to a great night in Charlotte where everyone got along and the talent was fantastic, as the judges flowed together better than just about any configuration the show has ever had.

The question now is how long the peace will last. You’d recall there were reports of a feud earlier in the show which Mariah denied. The only reason no one could deny this was because it was taped. For the good of the show, ladies, grow up!