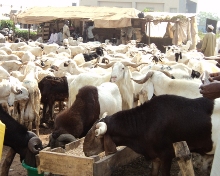 Indications from the ram market have revealed that this year’s Sallah celebrations may not be as bubbling as in previous years. The simple reason being that the price of ram has gone up by about 100 per cent in most Northern states. These states, as we all know, are the major sources of the commodity to the Southern part of the country.

As will have been guessed, the menace of Boko Haram has been blamed for the hike in prices of the Sallah rams. A random survey carried out by Saturday Tribune in ram markets on Friday, however, showed a crash in price only in Borno State, where most of the residents complained of the likelihood of their having a low-key celebration owing to insecurity.

However, in Kano and Kwara states Muslims were found to be complaining over what they considered as the unjustified price hike of ram by dealers, saying they had thought the price would be more affordable almost a week to Sallah. The smallest ram in the two states went for N40,000, depending on the location of the market, as against N15,000 during the same period last year.

A big ram sold for as much as N210,000, with some dealers blaming the exhorbitant price to insecurity, which has not allowed businessmen to bring rams from neighbouring countries like the Republic of Chad. Kano state topped the list of states with such astronomical increase in price with the price differential at road side ram market relatively insignificant. The smallest one sold for N30,000. A similar size attracted N35, 000 at the popular Bichi market, while a medium one went for N50, 000, just like at Wudil market and the Kofruwa market, as against N25 , 000 and N30, 000 last year.

Most people, who were interviewed, noted that Borno and Yobe states, which were the major routes traders used to bring rams, had become impassable due to the activities of gunmen.