The Senator representing Borno Central, Ahmad Zanna, has said contrary to the claim by the Joint Task Force (JTF), a Boko Haram commander, Shuaibu Bama, was arrested in the house of former governor Ali Modu Sheriff and not in his own house.

The senator, Sunday, said that the attempt by the JTF to link him with the Boko Haram commander by claiming that he was arrested in his house was a plan to frame him.

The senator alleged that his recent interview where he called for the withdrawal of the JTF from Borno on account of failure to adhere to standard operating procedures, was the reason for their attempt at implicating him. 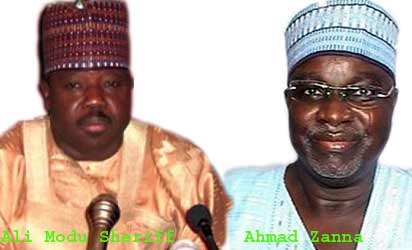 His words: “About 40 members of the JTF came to my house in four armoured vehicles on the day in question. They ransacked my house and they did not see anything incriminating. Then they brought out all the boys they met in my house who included my children, aides and neighbours.

I am the only serving senator who has a house on the Dabuwa Road.  Bama was not arrested in my house.  He was arrested at the house located at Rabi Street, off Dambuwa Road.  My case is a very clear case of framing.  But it has failed.”

Not denying his relationship with the suspected Boko Haram commander, Sen. Zanna admitted that the suspect was his nephew and once lived with him but that he had to  send him away from his house about a year ago, when he discovered that the man was into drugs, beat his children and threatened even himself.

His exact words, “Shuaibu Bama is my sister’s son.  He once stayed with me but I sent him away about a year ago when I discovered that he was a drug addict and was beating my children.  He even threatened me and also threatened to kill his mother. I did not know him to be a member of Boko Haram..”

When asked if he has been questioned by the JTF, the senator said no.  According to him, “it was only this morning (Sunday) that I received a text saying that the Director-General) of SSS wants to see me.”