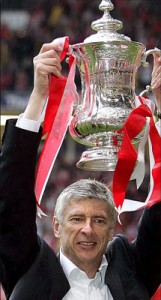 Arsenal Football Club manager, Arsene Wenger has launched a stunning defence of his Arsenal record, claiming qualifying for the Champions League is like winning a trophy. It is no longer news that the Gunners have been without silverware for over seven years. But they are in Europe’s top competition for the 15th consecutive year.

He continues: “I say that because if you want to attract the best players, they do not ask ‘did you win the League Cup?’, they ask you ’do you play in the Champions League?’”

Meanwhile, Chief Executive Ivan Gazidis, chairman Peter Hill-Wood and majority shareholder Stan Kroenke were all heckled at the AGM over the club’s financial strategy. Wenger, though, received a warm reception after his address, which had opened with an apology for the back-to-back defeats against Norwich and Schalke. He said: “If everybody is absolutely devastated when we finish third in the league, I promise you I will not be here if you finish 15th one day.