Chris Brown has opened up about his romance with Rihanna in a candid new video. The video is a true expression of emotions, love, confusion and above all, it just shows he’s only human afterall and susceptible to feel emotions.

The singer posted the footage, which he entitled ‘The Real Chris Brown’, after confirming his split from girlfriend Karrueche Tran.

And in the video, Brown reveals his anguish over ‘loving two people at the same time’ as scenes were shown of both him and Rihanna, and him and Karrueche.

Is there such thing as loving two people?  I don’t know if that’s possible but for me, I feel like that. Y’all probably like, ‘What the f-ck is he talking about right now’ but I am being real. I don’t want to hurt either or.  I’m not trying to be a player, or a dog, not none of that. My mother raised me differently, so I just can’t. I don’t know man, a n-gga be stressing. That’s what n-ggas do. The life of Chris Brown

But after Brown made his video public, Karreuche was less than impressed with his admission.

She tweeted: ‘Wtf is going on? All I’m saying is.. You don’t mess with people’s genuine feelings. You just don’t!” ife moves on.. So let’s all.’ 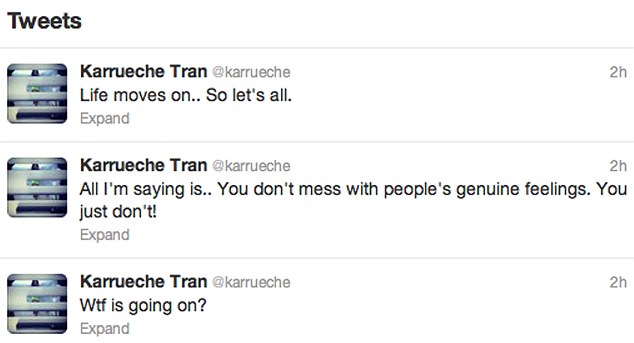 Meanwhile Rihanna made a veiled reference to Brown as she wrote on her Twitter: ‘Ain’t nobody bidness….. But mine and my baby!’