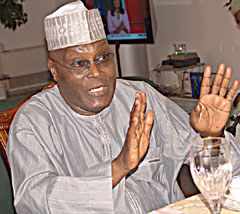 As the country’s Senate, on Thursday, began the public hearing on the review of the 1999 Constitution, former Vice President, Atiku Abubakar has advised that if the country must address the issue of security, there must be the establishment of State Police.

The former vice president stated this position in a paper he presented to the Senate Committee on Review of the 1999 Constitution. Atiku also called for the return of a two-party system as way forward, if Nigeria must get it right democratically. He further called for a full scale activation of the six geopolitical zones as centre of power and governance, adding that such arrangement would help to reduce the “harmful tension, bickering and competition for power at the centre.”

Defending his stance on the issue of state police, the former vice president’s advice, contained in a four-page paper, stated that the state police, if introduced, “will guarantee security of lives and property and create an enabling environment for our different people to develop at their own pace.”

Meanwhile, the Inspector-General of Police (IGP), Mohammed Abubakar, has a different stand on the issue of state police. Represented at the hearing by CSP Dabid Abuo, the IGP stressed the need for the status quo of central police structure to be retained, stating that state police would be too expensive to fund.