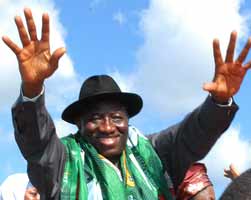 With plans to review the 1999 Constitution in top gear, President Goodluck Jonathan has assured Nigerians, that he will abide by the wishes and desires of the people of Nigeria.

The president was speaking during the celebration of former Vice President Alex Ekwueme’s 80th birthday at an international colloquium organised in his honour. The event which had as its theme, “Nigerian Federalism: Building on the Ekwueme Legacy,” took place at the Thisday Dome, Abuja on Tuesday.

Represented by the Secretary to the Government of the Federation (SGF), Senator Anyim Pius Anyim, Jonathan noted that the challenge before the nation was for Nigerians to agree to commit themselves to the development, growth and survival of Nigeria. The president also described Ekwueme as a bridge-builder, adding that he was the architect of Nigeria’s democracy, father of the Peoples Democratic Party, PDP and a great star of our time.

President Jonathan also said Ekwueme was a clean personality that could not be stained by politicians, pointing out that Ekwueme came out of office poorer than he was before he became the nation’s number two citizen from 1979-1983. The president urged Nigerians to be patriotic and support the country, adding: “I have no personal opinion on how Nigeria will be structured, but I will abide by what Nigerians want.”