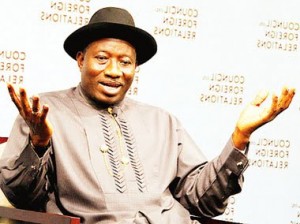 In a similar vein, on Sunday, during the 52nd Independence Anniversary Interdenominational Church Service, held at the National Christian Center Abuja, President Jonathan had also said, “On corruption, Transparency International that has never spared Nigeria, admitted in its latest rating that Nigeria is second to America in her commitment to fight of corruption… God willing we shall overcome it”.

However, Transparency International had in response to an email from Premium Times, denied the claim stating: “Transparency International does not have a recent rating or report that places Nigeria as the second most improved country in the fight against corruption.” This information, it was reported, had brought about some tough time for the media aides of the president. Apparently, they have not properly done their homework, or the president is being too ambitious in trying to impress on the people his achievements, or – and we hope this is the case – Transparency International DID rate Nigeria as such and there is some kind of mix up. The more curious ones will go one and check the website of the organization to see for themselves: http://cpi.transparency.org