On September 27th 2012, men of the Economic and Financial Crimes Commission, EFCC, apprehended one Abubakar Tijani Sheriff at the Murtala Muhammed International Airport while attempting to smuggle about $7million out of the country.

He was presented yesterday before a Federal High Court sitting in Lagos and though he got most of his seized money back, he forfeited  a percentage to the Federal Government of Nigeria. 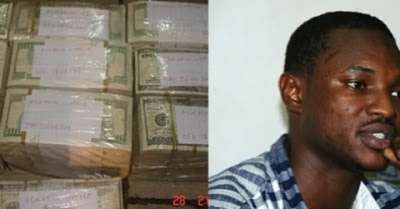 For not declaring the total amount of cash on him to the relevant authorities, the court ordered the EFCC to return the $4.5million he declared at the airport when he was traveling while 25% of the remaining $2.5million that wasn’t declared, should be forfeited to the government – that translates to about $625,000.

According to the defendant’s lawyer, the money he was travelling with before he was arrested belonged to a group of 20 persons
who pooled their resources together to buy goods in large quantities in order to get a cheaper bargain and down down the cost price. The 20 unnamed persons are reported to have visited the EFCC office to explain how they got the money and what it was intended for.