The kokomaster D’banj, has been picked as the Best Act to represent Africa as a Worldwide Act nominee at the 2012 MTV EMA, billed for Frankfurt, Germany on November 11th, 2012. MTV EMA announced his nomination on their website.

Dbanj had to contend with four other African nominees to come out victorious. They are Camp Mulla from Kenya, Sarkodie from Ghana, Mi Casa from South Africa and fellow Nigerian, Wizkid. The winnner was picked based on highest number of votes received.

Dbanj who has previously won Best African Act at the 2007 MTV EMA, ‘Artist of the Year’ at both the 2008 and 2009 MTV Africa Music Awards, and ‘Best International Act: Africa’ at the 2011 BET Awards which he shared with 2face, will now go head to head with other music artistes from the Africa-India-Middle East category which includes India’s Alobo Naga & the Band and Ahmed Soultan from the Middle East for the chance to represent the region in the Worldwide Act category. 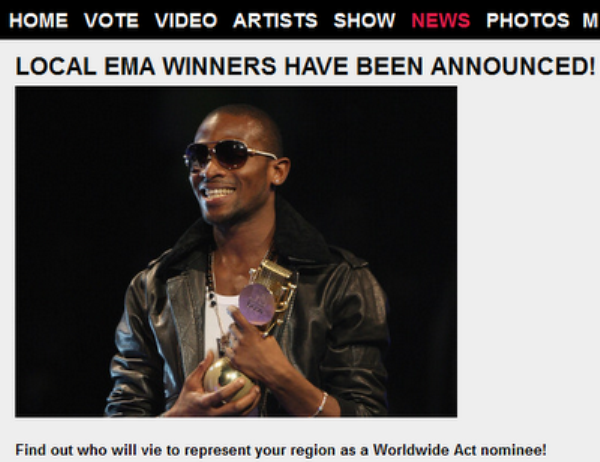 Popular Canadian Singer Justin Bieber was reportedly asked to leave a gym in Los Angeles when Taylor Swift arrived for her workout. The incident was...
Read more
- Advertisement -