Home General News Ever Been Disappointed by a Craftsperson? Tailor Gets Jailed for Breach of...
Facebook
Twitter
WhatsApp 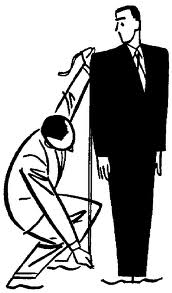 A lot of people have at one point in time or the other found themselves helpless in the hands of craftsmen without knowing what to do. The most common type of torture people suffer in the hand of these craftsmen is delay in delivery of jobs taken. These disappointments could cause unimaginable measures of loss to customers sometimes. And they could have been avoided if the craftsmen are more honest when promising on the time of delivering jobs.

Most of the times customers too do not know there are proper ways of dealing with these kind of situations. Definitely the customer in the following narrative does not fall in that category.

According to the Punch, a 23-year-old tailor, Sylvester Ezebuibe, was on Thursday sentenced to three months imprisonment by an Osogbo Magistrate’s Court for failing to sew a suit after collecting N7, 000 from a customer, Mr. Adebiyi Fasoro. The defendant was reported to have collected the money from Fasoro on August 26, 2012, promising to make a suit for him.

Police prosecutor, Isiaka Ajadi, had said that Ezebuibe committed the offence deliberately. Ajadi said Ezebuibe and Fasoro met at a popular eatery in Osogbo, Osun State, where the convict said he was going to sew a suit for the complainant. Ajadi told the court that Fasoro gave Ezebuibe N7, 000 out of the N13, 000 charged and the complainant had to report the case at Dugbe Police Station, Osogbo, when the tailor reneged on his promise.

Ezebuibe was also accused of obtaining money under false pretence and stealing – offences contrary to, and punishable under Section 419 of the Criminal Code, Cap 34, Volume II, Laws of Osun State, Nigeria. Ezebuibe, who pleaded guilty to the two counts, urged the court to temper justice with mercy and promised to return the money to Fasoro at a time chosen by the court. The Magistrate, Mr. Olusola Aluko, sentenced Ezebuike to three-month imprisonment with hard labour or payment of N2, 500 fine.