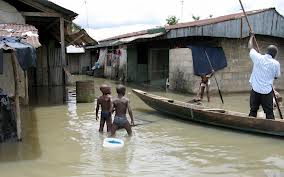 It would be recalled that about a week ago, the hometown of the president was reported to have been submerged by the flood ravaging the country. Following this development, Governor Henry Seriake Dickson of Bayelsa State yesterday ordered the immediate evacuation of President Goodluck Jonathan’s kinsmen in Otuoke, Ogbia Local Government Area of Bayelsa State.

Even the President’s country home was not spared by the rampaging flood that has submerged the community. The concerned residents were sacked by the flood which in the last three weeks has rendered thousands of people in the state homeless, and property, worth millions of naira, destroyed.

During his visit to the affected areas, the Deputy Governor, Rear Admiral Gborubiogha John Jonah (rtd), ordered the evacuation of the affected residents to one of the relief camps in the community on the orders of the governor.

According to him, the evacuation became imperative against the background of the hardship the residents have been subjected to, and to avert the outbreak of epidemic in the area. Dickson also added that government was taking pro-active measures to mitigate the impact of the rising level of water.