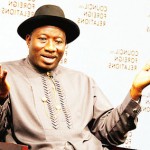 As it has been said before, nature is a respecter of no one. Just about a week ago, the news was reported about how the homes of a former minister and lawmaker were submerged in the flood. A royal father was also reported to have drowned.

However, this time around, the flood has visited no other but the very first citizen of the country President Goodluck Jonathan. Reports have it that his country home, Otuoke, just at the bank of the Kolo creek in Ogbia Local Government Area of Bayelsa State, was over the weekend, submerged by the devastating flood, following the ceaseless torrential downpour in the last few days.

It believed that over 90 percent of Bayelsa State has been submerged by the raging flood. All the motorable routes to the President’s hometown have been over taken by flood, thus, making canoe the only means of transport to and fro the community. Also, the landing space for President Jonathan’s helicopter has now been converted to a refugee camp, as the flood has sacked thousands of people from their homes.

Lamenting the natural disaster which has wrecked havoc in the state, Governor Seriake Dickson, whose hometown was also affected, stated that six of the eight local government council areas in the state were under water: “I couldn’t land in my own community when I went there,” he said.