Flooding: PDP Advices Nigerians To Stock Up On Supplies As Food Shortage Looms

The Peoples Democratic Party on Wednesday asked Nigerians to be prepared for imminent food shortage. The party said scarcity of food would be one of the effects of the floods that ravaged some parts of the country recently.

Rising from its National Working Committee in Abuja, the PDP however commended President Goodluck Jonathan for steps taken so far to cushion the effects of the flood on victims. 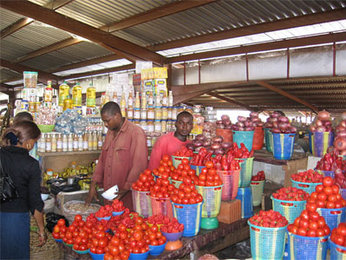 According to a statement by the National Publicity Secretary of the party, Chief Olisa Metuh, the PDP said Nigerians must know that flooding was a global phenomenon.

The statement reads, “PDP has commended the President for the firm and reassuring steps the Federal Government has taken to mitigate the impact of flooding across the states of the federation and forestall further threat to the nation.

“The Party has also called on relevant government agencies and entire Nigerians to brace up for the challenge of food shortages which the impact of the flooding may likely occasion.

“Flood disasters are a global phenomenon but our peculiar challenges of development demand deeper insight and capacity which the President has demonstrated.

“We therefore commend him for the medium and long term measures being put in place to first ameliorate the suffering of the affected Nigerian communities as well as for the steps already being taken to permanently put under check, the incidence of flooding in future.”

The party further appealed to federal, state and local governments as well as farmers to take measures to avert imminent food shortages on account of the flood.

It promised to liaise with all the relevant agencies of government to work out plans to forestall possible food shortages arising from the food.

Metuh said in the statement that the party noted with happiness that the Presidential Technical Committee set up by the President urgently rounded off its interim impact assessment of the flood ravaged states upon which government energised its agencies to offer immediate relief.

He added that the party had also noted that the President had been in synergy with the leadership of the National Assembly and Governors of the affected States in confronting this menace.

The party particularly commended the President for releasing the sum of N17.6 bn and for setting up National Committee on Flood Relief and Rehabilitation to further assist it in raising fund for what it called the “post impact rehabilitation of the affected victims.”

A British pensioner who has been blown away by love is planning to wed her 35-year-old Egyptian toy boy despite the age difference between...
Read more
- Advertisement -