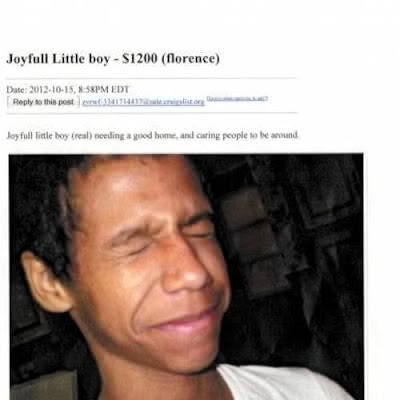 Only God knows what goes through the mind of kids these days. How would anyone explain putting up your sibling for sale online?

Alabama police were searching for a teenage boy and his family after his older sister got into a fight with him and tried to sell him on Craigslist.

A Florence teen put her younger brother up for sale on the e-market under the title “Joyfull (sic) Little Boy – $1200” with his photo and a description that read he was looking for a good home and caring family.

The ad was meant to be a family prank though, but it sparked a statewide police hunt after receiving calls from various people Thursday morning (Oct. 25).

“Unfortunately, people do put kids’ photos out there on websites offering them for sexual encounters…we didn’t know if someone is trying to sell this kid for sex, human trafficking or what,” an Alabama police officer told the Times Daily.

The ad has since been removed from Craigslist and though no charges were filed, the girl was given a stern talking to. [VN]