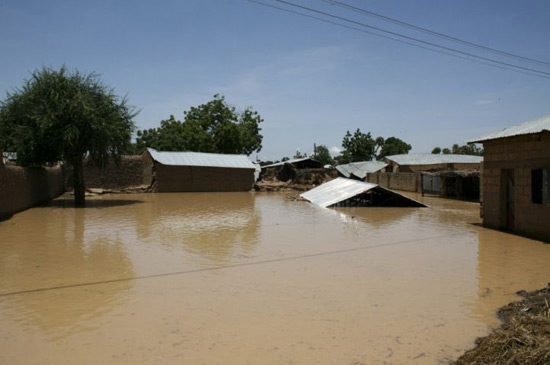 As part of his comprehensive tour of flood-hit states in the country, while in Benue State, President Goodluck Jonathan assured that his administration would take steps to avert flooding in the country in the coming 30 to 50 years by ensuring the completion of the Kashin-bila dam in Taraba State; the construction of a dam on River Benue and dykes across the country.

The President gave this assurance in Makurdi, the Benue State capital, when he visited the state to assess the damage caused by flood in parts of state and also to commiserate with the victims. While lamenting the condition of the victims, the President also decried economic losses suffered by the victims, assuring that the Federal Government would do everything to mitigate the effect of the flood on their lives.

He then noted that the Federal Government had already released N500 million to the state government stressing that this would be disbursed to the victims to assist them to pick up their lives again.

Jonathan also promised the release of funds to the Federal Ministry of Agriculture to purchase improved seedlings that would be distributed to farmers across the country, adding that money will also be given to the Ministry of Health to ensure control of water borne diseases like cholera and diarrhoea in parts of the country in the aftermath of the flooding. He said, “Government is committed to turning your calamity into a blessing. Those of you who lost farmlands would be given high yielding seedlings to make you improve your farm produce. We will help you start new economic lives and pray that you do not suffer from such calamity again.”