Heidi Klum made his relationship with his former bodyguard no secret after her divorce with British singer, Seal, although the model deny being with the bodyguard while she was still married to Seal. A lot of people believe if that was true, she wouldn’t get together with the bodyguard as soon as she did.

No matter what anybody says now, the bodyguard got the boss’ wife. The boss lost. They look like a family now. 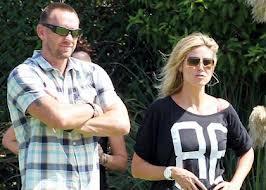 The former bodyguard, Martin Kristen took off his bodyguard cap and donned his boyfriend one cheering alongside former boss turned girlfriend, Heidi Klum at her son’s football game in Brentwood on Saturday.

They were good to watch for anyone who doesn’t give a damn about their history, but a brother would be hurt seeing their pictures all over the internet. It’s really over, Seal. Move on.