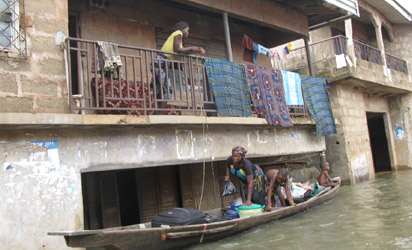 Statement by the Special Adviser to the President on Media and Publicity, Dr. Reuben Abati, on Wednesday has revealed that President Goodluck Jonathan will on Thursday begin the first-phase of an inspection tour of states affected by the floods.

Abati said the president would visit flooded parts of Kogi, Anambra, Delta, Bayelsa and Rivers. He also pointed out that, before embarking on the tour, the president would inaugurate the National Committee on Flood Relief and Rehabilitation on Oct 11.

Earlier on Tuesday, during the national broadast, the president had constituted the committee on the ravaging flood. The committee was established as part of measures by the Federal Government to provide urgent succor and relief to victims of the floods across the country.

Alhaji Aliko Dangote and Mr Olisa Agbakoba have been made co-chairmen of the committee while Dr Mike Adenuga of Globacom is the Chief fund raiser. The committee is charged with the responsibility of raising additional funds to support ongoing efforts by the Federal Government to ensure the provision of adequate relief to flood victims.