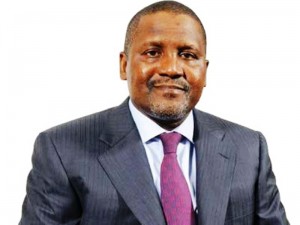 The donation which comprises N50 million worth of food items and N150 million cash, totaling $1,250,000. The donation is only a part of the assistance Dangote planned to offer the people of the state. In addition, he plans to empower 1,000 women in each of the 21 local councils in the state, for which he has budgeted another sum of N230 million. Each woman, will receive a token sum of N10,000, about $65 to start a petty business of their choice.

He made the donation known on Saturday during a sympathy visit to the state government in the capital, Lokoja.

Dangote, who said he was personally touched by the plight of the victims, described the flood disaster as unprecedented. He urged the victims to see the disaster as an act of God, saying that it had become imperative for corporate organisations and public-spirited individuals to lend a helping hand.

Dangote who was accompanied by his daughter, Hajia Halima, commended Governor Idris Wada for quickly putting in place measures to ameliorate the plight of the victims.

He praised the Federal Government for its quick intervention through the National Emergency Management Agency which he said dispatched a search and rescue team to Ibaji Local Government to rescue victims and donated drugs, clothes and other items to the victims.

Dangote said he planned to empower 21,000 women in Kogi by giving them N10, 000 each to enable them start petty businesses.

He said the beneficiaries should be selected on the basis of 1, 000 women per local government, saying he had set aside N230 million for the scheme expected to take off in the next one month.
Dangote, accompanied by the governor, later inspected some of the flooded parts of Lokoja and also visited some of the victims at their temporary camp at St Luke Primary School, Adankolo.

Responding, Wada described the gesture as overwhelming, adding that it was the largest donation received so far by the state government on behalf of the victims.

He said that the flood problem was of historical significance to the people of the state as many of them took things for granted.