Home Metro News Lagos May No Longer Exist In 50 Years As A Result Of...
Facebook
Twitter
WhatsApp

Sounds like apocalypse but this is no dooms day prediction as experts have alerted that in 50 years to come, Lagos risks being washed away by tidal waves. It is the only Nigerian costal city that might go under if nothing serious is done to stop it.Climate Change and the poor environmental attitude of the residents are already assisting this prediction to come true. 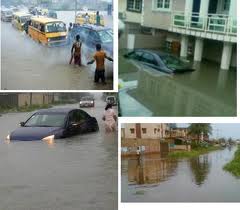 Earlier, the Organisation for Economic Cooperation and Development (OECD) based in France, had, in a study entitled Ranking of the world’s cities most exposed to coastal flooding today and in the future, revealed that Lagos was at risk of being submerged in the next 50 years. Lagos was among cities in the developing world facing similar fate. Cotonou, Liberia and Abdijan in West Africa were in the number.

OECD said that “in the 20th century, sea level rose by an estimated 17 centimetres but conservative global mean projection for sea level rise between 1990 and 2080 ranges from 22-34 centimetres. Oceans which have been absorbing 80 per cent of the temperature increase attributable to global warming are expanding as ice sheets in the North and South poles melt. These events have led to a rise in sea levels and increasing flooding in coastal cities. The projected rise in sea levels could result in catastrophic flooding of coastal cities.”

A University of Lagos don, Dr Emmanuel Enyeribe Ege, said the prediction about Lagos and other cities re-echoed in Rotterdam in June this year at a programme entitled Urban Development Tools and Climate Change and its implication for the world. It was organised by the Institute for Housing and Urban Development Studies (IHS) of the Erasmus University, Rotterdam, in The Netherlands. Dr Ege, who teaches in the Department of Geography said: “From what I observed, what they (in Europe) are doing regarding climate change and what we are doing here are poles apart. It is clear that we are too complacent with climate issues.

However, I commend the Lagos State government for taking the right steps in the right direction.” He regretted, however, that the populace is generally not aware of issues of climate change. Now the question is, what do Nigerians need to know and do to prevent calamity from befalling Lagos? Mr Abayomi Oyegoke, Chief Meteorologist at Nigerian Meteorological Agency (NIMET) Lagos, explained that climate change is critical in the life of Lagos. “Climate change means changes in various climatic conditions in different places around the world.

For example, the Little Dry Season we call August Break has been prolonged this year. It used to last for six weeks in the South west region of the country. But it has now lasted much longer. This is as a result of climate change; the phenomenon changes in weather conditions and times of their occurrence which hitherto were unknown.

“It increases the temperature of the air which causes global warming. This happens when a lot of carbon dioxide is released into the atmosphere. It is the same carbon dioxide that plants in our environment consume. But unfortunately, we often ignorantly destroy these trees. People don’t know that trees support lives.

Humans make use of the oxygen plants release into the atmosphere while plants in return, consume the carbon dioxide we discharge. So the relationship between us and plants is a healthy, symbiotic one. But when we destroy these plants, we create problem for ourselves. Unfortunately, in Lagos no one cares about planting trees; existing ones are being cut down daily.

This action contributes largely to climate change because they help to alter the course of nature. Those who hack down trees do humanity a lot of harm.” But would it surprise anyone that only a handful of Lagos residents know a bit about climate change and how trees can save the city? Painfully, this ignorance doesn’t subtract from the growing fear that global warming, climate change and the city dwellers’ penchant for abuse of the environment bring. To underscore this, in the recent past, never-seen-before flooding, storms and ocean surges, have been commonplace.A few weeks back, for instance, the Atlantic Ocean roared like an angry gorilla and furiously attacked residents of Kuramo Beach in Lagos.

In one fell swoop, no fewer than 16 people were feared swept away. Last year alone recorded severe storms and unusually heavy rains which caused heavy flooding. The tragic disasters destroyed lives and property worth millions of naira, leaving many to rue the ruin they left behind. Dr Ege said one way to reduce this menace is to let “people know the importance of reducing their carbon production and input into the environment, for example, refuse dumping. People are still dumping refuse into water bodies and drainage channels.

These practices in one way or the other lead to the production of carbon dioxide, sulphur dioxide, nitrogen oxide and other injurious gases to the environment. So residents destroy the city with the waste they generate at home and where they dump them. If we can control our waste and ensure that it is dumped indiscriminately, then we can save our environment. “When we burn our refuse, we cause a lot of dangerous gas to be released into the atmosphere. They get concentrated there. These gases make some parts of the atmosphere which are supposed to be permanently cold to become warm.

Not only that, some areas in the cold zones of the world which are supposed to be cold also become warmer because of this practice. What that means is that huge icebergs in those zones now melt.

Water released from those cold regions now drifts towards warmer regions and cause the ocean level to the rise above the normal.” The implication of this for Lagos, he said, is that “most parts of Lagos State below the sea level are affected. So if we have a sea surge and it is not controlled then we are in trouble.

There is much to fear as Lagos is one of the cities in West Africa adjudged vulnerable to ocean surge. So if our government does not listen and apply what the Rotterdam model says – find a way the excess can percolate or settle, clear the drainages of refuse, and erect a mechanism to wedge the surge, then we are in trouble. “The last ocean surge in Lagos which swept away some residents was an eye opener. The truth is that when there is a tilt in the climatic system, it can affect anywhere in the world. Unfortunately in our coastal areas, there are hardly any buffers. The trees that used to protect those areas are gradually being cut down. So, any settlement in those areas is at risk of being washed away by ocean surge.”

He commended Governor Fashola’s environmental crusade but insisted that “the state government still needs to build more recycling plants and ensure that there is a conscious way of harnessing waste. His tree planting campaign too needs to be re-invented. More and more people need to understand that they have a duty to protect the future of Lagos by caring for the environment.” He said Governor Fashola’s environmental drive was recognised in Rotterdam as he was honoured alongside a governor from Columbia.

Part of the letter announcing the award reads: “It is with great pleasure that we announce the 1st IHS Alumni International Award of Distinction 2012 which will be presented to Dr. Sergio Fajardo, former Mayor of Medellin, Columbia and the current Governor of Antioquia and His Excellency, Mr. Babatunde Raji Fashola, the Governor of Lagos, Nigeria. “IHS salutes Dr. Fajardo and Governor Fashola for their leadership, dedication and tenacity in giving to the world, rich and powerful examples of what are possible when proper urban planning, development and management tools are maximised for the benefit of city dwellers and the rest of the nation.”