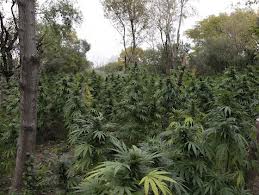 Associated Press reports that police found one of the largest marijuana farms in Chicago history. The marijuana plants numbering about 1,500 had to be chopped down by overalls wearing police…badges and guns don’t cut marijuana down. The police officers said it could have earned the growers as much as $10 million.

Commander of the department’s narcotics division, James O’Grady, said they’ve never seen anything like it before. This is probably due to Chicago’s harsh winters which means growers would have a lot less time to plant, grow and harvest marijuana.

No arrests have been made as of Wednesday, and police are still looking for the property owners.

What has kept people who know Agriculture through and through is how the growers managed to grow marijuana in a city as windy as Chicago, with those extreme climate changes.