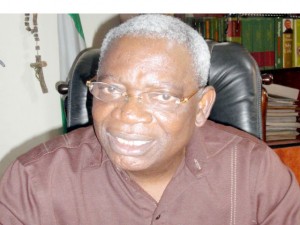 In an interview granted to the Sun, a former senator of the Federal Republic of Nigeria, Joseph Waku, has brought fresh controversy into secession tales surrounding the unity of the country. Waku represented Benue North West constituency of Benue State between 1999 and 2003. According to him, the Nigeria Delta region is on the path of secession with the policies of Jonathan administration.

The reason for this stand by the senator is none other but some policies adopted by President Goodluck Jonathan’s administration. When asked about what the former senator felt about how the government now employs ex-militants in the Niger Delta region to protect oil installations and pay them in millions he said:

“They are preparing for secession. It is not for the oil. What happens to the military? What happens to the police? Where are your SSS? Where are your several governmental agencies? Let no one deceive us. We are too old for that kind of gimmicks. Do you know the number of arms that have got into the Niger Delta through bunkering? Government knows; our leaders too know. No genuine educated human being will want to identify himself as a militant. It is a derogatory name; it is not a name that anybody will want to be identified with.”

He continues: “But they have become something to the extent that people now cherish them, instead of treating them like common criminals which they are. Yet, they are being given first class treatment.”

Nigerian rapper Naira Marley has taken to his Twitter page to body shame Nigerian women.According to the 'Tesumole' crooner, Nigerian women are pretty but...
Read more

A strange incident occurred at the Ministry of Animal Health Argungu, Kebbi state on Monday as a pregnant goat gave birth to a billy...
Read more
- Advertisement -