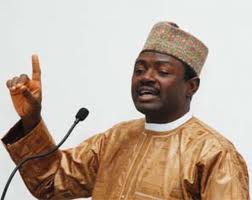 Mr. Labaran Maku, Nigeria’s Minister of Information, has declared that Nigerians have not enjoyed sufficient dividends of democracy in the 13 years of democratic governance in the country due to the completed disregard for the rules of the game by politicians.

The Minister stated this on Monday when he led a contingent of newsmen on the good governance tour of Benue State to pay a courtesy call on Governor Gabriel Suswam in Makurdi. Maku also identified bitter rivalries and unhealthy competition among political stakeholders as a major impediment to political stability, growth and development in the country’s democratic journey.

According to him, “In the 13 years of democratic rule in Nigeria, we have made a lot of progress, but has this been sufficient? It is no; the reasons for this is not far fetched, politicians engaging in bitter rivalries rather than playing by the rules.

“Politics in Nigeria is even rougher than what we have in the United States of America where elections are just few days away. Nigerians must not fail to realize that democracy is in itself an evolving process and the game must be played decently and by the rules”, he added.