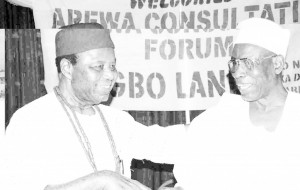 It has been alleged that Northern elders, under the aegis of the Arewa Consultative Forum (ACF) leaders last Wednesday slipped into Enugu to rub minds with Igbo leaders. This, it has been alleged, is because of the fact that Southwest leaders are presently engaged in a shouting match with their Southeast counterparts over the allegedly derisive comments on the Southwest sage, Obafemi Awolowo by literary giant, Chinua Achebe.

The Northern political and cultural leaders under the umbrella of the ACF had stormed Enugu on Tuesday for what was described as a crucial dialogue with Igbo leaders on various national issues. The Arewa delegation was led by the Chairman, National Executive Council, Alhaji Aliko Mohammed. Also, apex Igbo socio-cultural organization, Ohanaeze was the platform under which elders of the Igbo nation were assembled for the meeting. The The Ohanaeze delegation was led by the President General, Ambassador Ralph Uwechue. The meeting was held at the Universal Hotel, Independence Layout, Enugu.

The meeting was said to be the idea of f ACF and it was significant being the first time in the current dispensation where elders and notable leaders from Northern Nigeria and their counterparts from the South East sat together around a common table to discuss national issues.

According to the ACF leader, “We requested for this meeting with the belief that civil society organisations and cultural groups such as ours, the Ohanaeze Ndigbo, Afenifere, South South Peoples Assembly, etc, have a duty to dialogue with each other and search for solutions to the major issues of concern to Nigeria.”