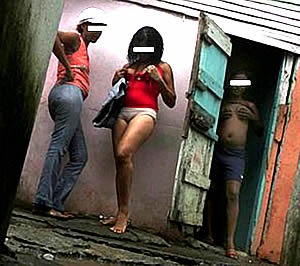 One would think that the sharia states are spared from one of the oldest professions known to man – prostitution. This story, culled from the Tribune, gives a glimpse into how the trade in the female “body” is practiced in Kano State.

According to the author, in the streets of Kano, the ‘sellers of sex’ humour themselves with the name ‘student’; and their areas of operation are Enugu road, Abedie, Sanigiwa, Warri, Club, Onitsha, Yoruba roads, etc. They operate in key hotels in these areas.

Some of the ladies who were interviewed had lamented how the security situation in the Northern state had badly affected their business. However, more interestingly, they had proudly claimed the importance of their services in the sharia state, saying if not for them cases of rape would be rife in sharia states.

One of them had this to say: “One thing I want you to know is that, we ‘students’ also have our own advantage to the community. If not because of our services, most women and ladies could have ended up being raped, but the good side of it is that any man that needs ‘quick service’, will come to us and this will automatically discourage him from engaging in rape which could land them in jail.”