Here is the first picture of ‘miracle man’ Fabrice Muamba on his wedding day. Just seven months after he collapsed on the pitch when his heart stopped during a match, leaving him technically ‘dead’ for 78 minutes, the Bolton Wanderers footballer married Shauna Magunda in the most emotional ceremony of the year. 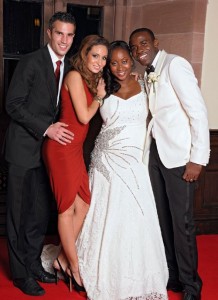 Fabrice, 24, and Shauna married in a ceremony in front of footballers including Robin Van Persie, Andy Cole, Jason Roberts and his ex Bolton teammates Stuart Holden and Martin Petrov.

Man Utd striker Van Persie, who attended with his wife Bouchra, said, “Today is particularly special because of what happened to Fabrice. The cardiac arrest had a big impact on everyone in football, and we all lived the moment as Fab recovered in hospital.

“Everyone is so relieved and happy for him and Shauna, and Bouchra and I are grateful to be part of this day.”

Also joining the congregation was one of the men who saved Fabrice’s life, Dr Sam Mohiddin from the London Chest Hospital.

He said: “Seven months ago this day was completely inconceivable.

“I just feel elated for Fabrice and Shauna, and so honoured to be here to celebrate with them. To see Fabrice today looking so happy and full of life is fantastic.”

Fabrice added: “This year has been a difficult one but, to me, marriage is the happy ending.”

Share
Facebook
Twitter
WhatsApp
Previous articleJTF Recover Arms In Yobe
Next articleInsecurity: We all have roles to play… and we should play it well – IBB
- Advertisement -