The 2013 Budget on Monday passed second reading in the Senate but the lawmakers faulted the budget expressing concern that funds appropriated for capital expenditure would not encourage growth.

Leading the debate on the budget, Senate leader, Victor Ndoma-Egba said the 2013 budget makes provisions for the sum of N971 billion for petroleum subsidy. 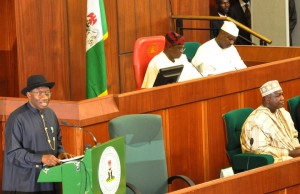 The plenary session lasted several hours as lawmakers took their time to debate the 2013 budget as some of the lawmakers noted that the proposed budget is not offering Nigerians anything dramatically different.

The lawmakers faulted the allocation for recurrent expenditure and debt servicing.

Some other lawmakers also flawed the allocations for what they consider to be critical sectors of the economy while some expressed dissatisfaction with the manner in which the SURE-P program has been managed.

Meanwhile, some lawmaker’s grievance still lies with the level of implementation of the 2012 budget.