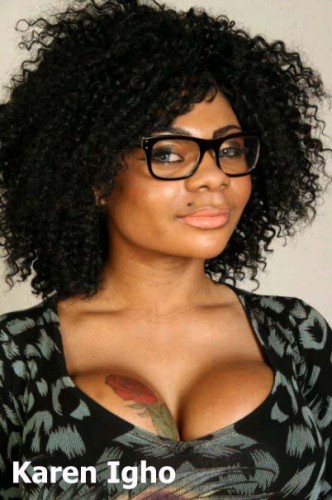 If there is one sector that has given the entertainment industry in Nigeria a bad name, it would be the motion pictures industry called Nollywood. From cases ranging from husband snatching to high rates of divorce, fights, jealousy and many more.

It is an understatement to say that in every three marriages in Nollywood, there would be one surrounded with controversies. It is not that those in the music industry do not have their bad sides, but Nollywood seems to be too much.

For 2011 Big Brother Africa winner, Karen Igho, who is also an On Air Personality (OAP) with Naija FM, the occurrence might have been getting unbearable for her as a lady when she took to twitter to make her mind known about it.

Karen dropped a message for ladies which also included single Nollywood actresses who run after married man and warned that the law of karma awaits them because they will get what they do in full measure, shaken, pressed down and overflowing.

“Girls (including Nollywood actresses), stay away from married men or guys with girlfriends because what goes around comes back around (karma),” the Warri, Delta State Nigerian star tweeted.