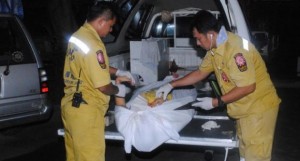 This took place in their Bangkok home at 2a.m after they had argued about his late-night computer-game playing, Police Major Prayuth Puengkaeha said. The mother, Areeya Ketdi, 45, was stabbed about four times by her son with a knife one-foot long. According to the initial investigation, the youth was unhappy that his mother had not allowed him to play computer games and scolded him for not helping with household chores.

Meanwhile, the boy’s father and his cousins told police that he had had autistic syndrome and been cured. However, he had a suppressed personality and was always scolded by his mother. He allegedly used to say he would want to kill his mother. Authorities took the suspect to the Central Juvenile and Family Court before sending him to another juvenile observation and protection unit.

Public Health Ministry deputy permanent-secretary, Dr Apichai Mongkol said the body releases dopamine hormones when a person is addicted to games, in a similar fashion to being addicted to drugs. Children at this age still lack emotional control, Dr Apichai said. When denied what they are addicted to, they may lose control and hurt others.