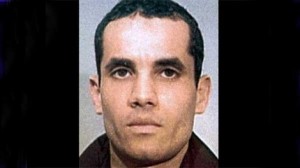 An Algerian terrorist, Ahmed Ressam, has been today sentenced to 37 years in prison for his plot to bomb Los Angeles International Airport over ten years ago, around the turn of the new millennium. It’s the third time he’s been sentenced in the case.

Interestingly, U.S. District Judge, John C. Coughenour has twice ordered him to serve 22-year terms, but both times the sentences were reversed on appeal because they were considered too lenient.

Ressam had been arrested in December 1999 as he drove off a ferry from Canada into Washington State with a trunk full of explosives. His attorneys have conceded that he should face at least three decades to satisfy the appeals courts, but no more than 34 years.

The Justice Department was seeking life in prison because of the mass murder he intended to inflict, and because he recanted his cooperation with federal investigators.