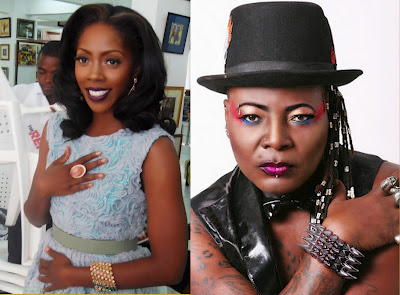 Rumours making rounds since September 19, when producers of the Nigerian Idol talent show launched the third season of the show, that season 2 co-host, Tiwa Savage would not be involved in the third season has been confirmed as sources say the singer is focusing more on her career and working assiduously on her debut album expected before the year ends.

Another prominent person missing at the September 19 event was one of the show’s judges, Charly Boy who has now made it clear he would still be on the judges’ seat, except this time he’s going to be there as his alter ego he referred to as Linda. So it will be Yinka Davies, Jeffrey Daniels, and Linda judging contestants on Nigerian Idol, season 3.

Speaking to NET, Tiwa Savage’s representative said the Mavin Lady is focused on wrapping up her debut album.

“It was difficult to combine with an increasingly time-consuming schedule. Nigerian Idol is something she will like to do again in the near future but not before she releases her new album amongst other things.”

Reacting to the issue, a rep for Optima Media Group (OMG) says it’s early to make conclusions on who’s in and who’s out.

“Why don’t we wait till the season starts, then you can ask me”, says Tiwa Medubi.

If no replacements are made, Illrhymz may have to host the third season alone.

Illrhymz and Tiwa Savage took over from pioneer hosts, Misi Molu and Anis Halloway in September 2011.