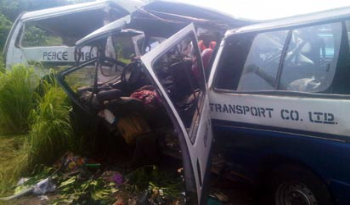 In what can only be described as a tragic event, no fewer than 20 people were reported to have died in when an auto crash occurred on Saturday along Kobape-Abeokuta. It was gathered that the victims, all members of the African Church Solution Camp, Ewang Estate, Abeokuta, had left for Lagos to attend a wedding ceremony of one of their members when tragedy struck.

The accident was said to have occurred at Ototo village located between Paramount F.M Radio Station and Police Computer College, Abeokuta around 7.30 a.m; and it was reportedly caused by a truck with registration number, Lagos, JJJ 489XB, which allegedly veered off its lane and rammed into a fully loaded Hiace passengers bus conveying the victims.

Many of the victims, according to an eye witness account, died on the spot following the impact of the collision, while others died in hospital. Two infants, including a two-year-old, were said to be among the victims.

Fayemi: Like Nigeria, Most Countries Are Products Of Involuntary Mergers