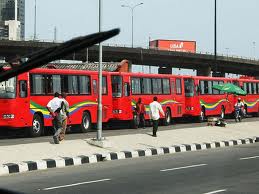 The driver of the LAG bus whose recklessness witnesses believed caused the accident was detained at the Ebute-Ero police Division while the injured passengers were taken to the General Hospital, Broad Street, Lagos.

According to a witness, the driver of the LAG bus drove recklessly. “He (LAG Bus driver) stopped for some passengers to alight under the bridge, and when he was about to move, he did not indicate to the commercial bus which was coming with speed. The commercial bus hit the LAGBUS from the rear,” the witness said, adding that all the injured passengers were in the commercial bus.

A Police source who confirmed the accident but opted for anonymity said the route number of the LAGBUS is A012 — Ikorodu, Ketu, Oworo and CMS.

The accident started panic among Lagosians as it had been earlier rumoured that a fully loaded BRT bus plunged into the Lagoon from the Third Mainland Bridge, but the Federal Road Safety Corps (FRSC), the BRT and LAGBUS authorities denied the report. [PM]