A 60-year-old man and five others were yesterday arraigned and remanded in prison custody, for alleged murder of three Nigerian National Petroleum Corporation, NNPC staff.

The defendants who are facing a seven-count charge of murder, vandalisation of oil pipe line, were arraigned before Justice Mohammed Idris. 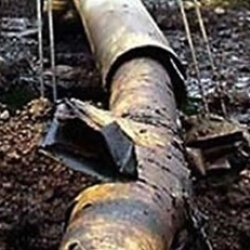 They were said to have committed the alleged crime on September 5, 2012 at Arepo near Ikorodu, area of Lagos.

The police prosecutor, Assistant Commissioner of Police, ACP Friday Ibadin, told the court that the six accused persons and others now at large, conspired amongst themselves to tamper with an NNPC oil pipeline.

He also alleged that the defendants murdered three men: Engr. Agbaku Oau, Ernest Ngene and Ikechuku Ikenem, by shooting them.

According to Ibadin, the offences committed are punishable under section 3 (6), 7 (b) of miscellaneous offences Act Cap M17 and Section 319 of the Criminal Code, Cap C38 Laws of the Federation 2004.

The three NNPC, staff who were allegedly killed by the defendants were carrying out repairs on the vandalised pipelines at Arepo, near Ikorodu when they were murdered.