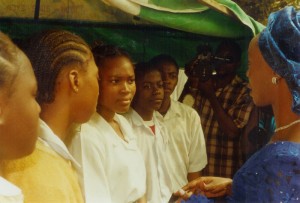 Chief Nyesom Wike, Minister of State for Education on Tuesday said that of the 10 million primary and secondary schools drop out nationwide 7.5 million were females.

The statistics was contained in a statement signed by Mr. Simeon Nwakaudu, the Special Assistant to the Minister on Media, in Abuja.

Wike made this known while declaring open a capacity building workshop to scale up Mothers’ Association at senatorial level in Sokoto.

According to the statement, the figure is not good for the future of the girl-child in the country.

The statement said that the workshop was organised by the ministry in collaboration with the Millennium Development Goals (MDGs) office for the seven states of the North West geo-political zone.

Wike tasked mothers in the North West zone to shape the future of their female children and to ensure that they enrolled them into schools.

Wike also said that the capacity building workshop was aimed at empowering mothers to shore up the enrolment capacity of children in their communities.

“We believe that the children are closer to their mothers and that the mothers can make impact in the lives of the children, especially the girls in their community to encourage them to attend school,” he said.

Wike expressed optimism that the capacity building would meet the ministry’s set objectives through improved enrolment among girls.

It also said that Mr. Aliyu Kardi, the North West zonal Coordinator of the Universal Basic Education, said the girl-child education in the North had gone up compared with the situation 30 years ago.

It added that Mrs. Adeola Fola, the Assistant Director, Gender Education in the Ministry of Education, advised parents not to bury the potential of their female children by denying them normal education.

Fola also enjoined women to realise that they have a say in their children’s education and the society at large.

The minister was represented by the Deputy Director, Special Education in the ministry, Mrs. Elizabeth Omotowa. [PMN]