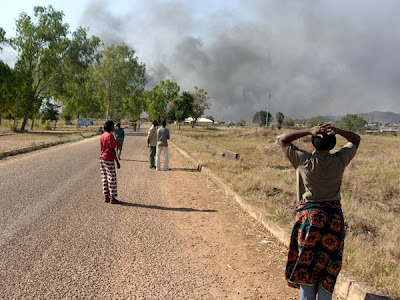 Yesterday was bloody in Nasarawa State as about seven persons were reportedly killed and 14 houses burnt in the Obi Local Government Area of the State in renewed clashes between Koro and Eggon tribesmen.

Confirming the killing, Commissioner of Police, Abayomi Akeremale said several houses were also destroyed by fire during the hostilities between the two tribes in Gwadanye area of Agyaragu.

According to eyewitnesses, the fight started when an Eggon boy was arrested by a vigilante group for allegedly stealing a motorcycle, but on investigation it was discovered that other boys, who were Koro by tribe, were involved in the act but had escaped.

The Eggon boy was matched to the village chief’s house in the company of a police officer. Other Eggon people insisted that the rest of the suspects involved in the crime be arrested since the victim claimed he knew their hideouts.

The demand for the people of Angwan Yakubu to fish out the alleged culprit resulted in a fracas that led to the death of the seven persons and the burning of more than 14 houses. The crisis escalated leading to the killing of innocent people in their farms.

Akeremale assured that security agencies were on top of the situation, adding that security personnel had been drafted to the troubled spot to ensure safety of lives and property.

Some of the casualties are currently receiving treatment at the specialist hospital in Lafia.