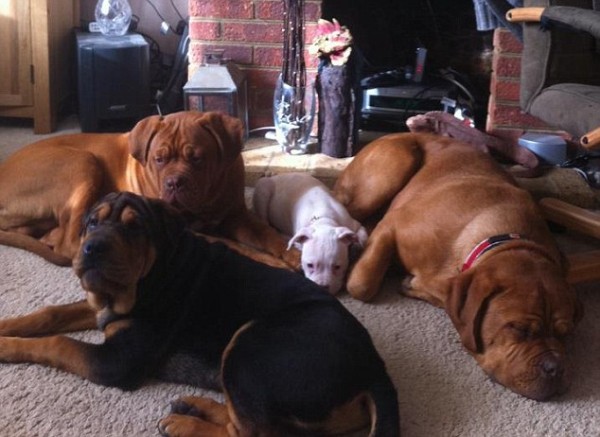 A great-grandmother was mauled to death by a pack of dogs she was feeding as a favour for her daughter.

The five animals pounced on Gloria Knowles, 71, after she went into the garden to give them their evening meal.

The widow was badly injured when the dogs – two ‘giant’ Bordeaux French mastiffs, two American bulldogs and a small mongrel – suddenly turned on her. Neighbours described hearing ‘hysterical screaming and barking’ from the garden.

Mrs Knowles lived next door to her daughter, Beverley Mason, with her granddaughter, who has a baby of  her own.

Mrs Mason lives with her husband, Dylan, and her other three children. The couple own the dogs together.

The family has run Harrington’s pie and mash shop in Tooting, South London, for several generations.

Police and ambulance services were called to the house in Morden, also in South London, on Tuesday night.

Five dogs were later seized from the semi-detached property, and it was revealed that Mrs Knowles had had a heart attack as the animals set on her. Nazir Hussein, a friend and neighbour of Mrs Knowles, was alerted to the attack when he heard Mrs Mason screaming ‘Mum, Mum, Mum’ outside the house.

Mr Hussein, 65, said he had long been afraid of the family’s dogs,  describing them as ‘vicious’.

‘I would see the dogs being walked in the park but I didn’t want to walk near them,’ he said.

‘They were vicious dogs – you knew by how they pulled on the lead and you could hear them barking from my house.

‘There were so many dogs something like this was bound to happen.’

Another neighbour, Kevin Hamilton, described hearing screams from Mrs Mason’s house at 5:15pm but mistook the noise, thinking it had come from one of Mrs Knowles’s grandchildren.

Mr Hamilton, 65, who lives in the other house next door to Mrs Mason, described hearing ‘hysterical screaming and barking’ as he watched television.

He only became aware of the attack when a police officer told him about it, explaining that Mrs Knowles was alone in the house when she went to feed the dogs. He said officers had told him it was Mr Mason who discovered Mrs Knowles’s body.

Mr Hamilton described the two mastiffs as ‘real muscle dogs’ with ‘enormous chests’, and said the animals had a ‘pack mentality’. He added: ‘If one jumped on you it would certainly knock you over.’

He described Mrs Knowles, a widow,  as a ‘fit old bird’ who talked to all the neighbours and enjoyed gardening.

She had lived on the street with her husband Victor for 40 years, until he died five years ago. Neighbours said her daughter and her family moved into the house next door the year after Mr Knowles’s death.

They explained that there was a gate between the gardens of the two houses which Mrs Knowles would regularly use, often to feed the animals.

Another neighbour, who did not wish to be named, said: ‘The dogs were always barking, everyone around here will tell you that.

‘They had always had dogs but never any that big. They were not the sort of dogs I would have around children, let me put it that way.’