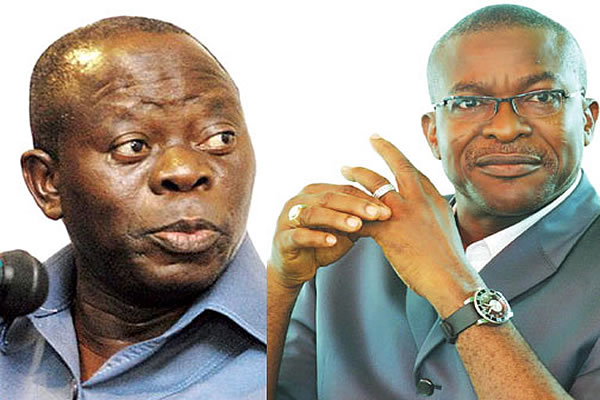 The court ordered the Edo State Governorship Election Petition Tribunal to hear afresh the petition filed against the election of Governor Adams Aliyu Oshiomhole of the Action Congress of Nigeria (ACN).

Chairman of the three-man panel of the court, Justice Helen Ogunwumiju who read the lead judgment, ordered the lower tribunal to begin afresh the hearing of Airhiavbere’s claims on alleged non-qualification of Oshiomhole to contest the election.

The court also dismissed the cross-appeal by the governor, which sought to quash the remaining issues of alleged non-compliance of the election to the Electoral Act 2010.

But Government House sources yesterday disclosed that Governor Oshiomhole may challenge the judgement at the Supreme Court.

In the judgement, Justice Ogunwunmiju upheld that the tribunal erred in law to have disqualified itself from entertaining Airhiavbere’s relief bothering on Oshiomhole’s qualification for the governorship election, insisting that issues in the petition could be tried.

She said though the petitioner had the option of approaching either the regular court or the tribunal, Section 177 of the 1999 Constitution also vested in the tribunal the jurisdiction to entertain the relief.

According to her, the Supreme Court had often frowned against the dismissal of election petitions on technical grounds that hardly allow parties to ventilate issues meritoriously.

The Appeal Court said that the appellant pleadings were clear, direct and formed the basis of his case.

The court, therefore, restored all the pleadings of the petition before urging the Acting President of the Court of Appeal to reconstitute a new election petition tribunal to hear the petition.

In his reaction, Airhiavbere, amidst his jubilant supporters, described the judgement as courageous. Edo State Deputy Governor, Dr. Pius Odubu, who was also in court, reaffirmed Oshiomhole’s academic qualification for the election.

He said the governor’s next line of action would depend on the advice of his lawyers.