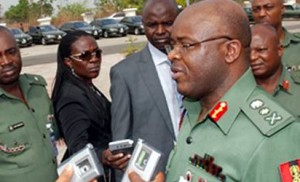 As fallout of terrorist attacks on army cantonments and other security installations in parts of the country, the Chief of Army Staff, Lt. General Azubuike Ihejirika, has directed that all civilians and non-military personnel residing in all army barracks be flushed out.

This directive of the Army chief came just as he disclosed that since assumption of office, his administration had paid off a massive debt portfolio of over N2 billion which he inherited from UBA and Oceanic Banks. He said he could not lay a finger on what previous administrations of the Army did with the money.

In his words, “All illegal civilians and those above 18 years should vacate the barracks immediately in view of the security situation in the country. Any Commander that fails to flush out these persons should be ready to face serious sanction.

“Nigerians should expect more comprehensive action by the military and all the security agencies… Some of the moves the army has initiates include that unit commanders should liaise more, supervise and monitor their personnel more closely than they have done in the past. So 2013 would be decisive.” As most Nigerians will know, no civilian who has had troubles with the military before would want to disobey this instruction.