Atiku and Obasanjo, who served as vice president and president of Nigeria respectively, between 1999-2007, had an estranged relationship during the last lap of their second term in office. 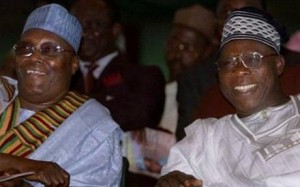 Both men were among a retinue of VIPs invited to the opening of the week long Comptroller-Generals’ conference held at the newly inaugurated auditorium of Katsina State University.

Obasanjo, who arrived ahead of Atiku, was seated next to second republic President Shehu Shagari and the Ooni of Ife, Oba Okunade Sijuwade.

Atiku, who arrived nearly 40-minutes after his former boss, first greeted the Emir of Gwandu, Alhaji Muhammad Iliyasu, Emir of Katsina, Dr. Abdulmimini Usman, the Ooni and Shagari who were seated at the podium.

When he got to Obasanjo, the former Vice President knelt down and bowed his head to greet his former boss.

The delighted crowd followed the mild drama with a loud applause and cheers.

A man who sat opposite the VIP podium raised his two hands up and shouted “Alleluia”.

Speaker of the House of Representatives, Aminu Tambuwal delivered a goodwill message, where he challenged the Customs to go beyond its “statutory role” of combating smuggling of goods.

Tambuwal listed other roles of the service to include revenue collection, trade facilitation and border protection.

He urged the service to collaborate with other relevant agencies in the country to improve their services.

He pledged that the National Assembly would support the ongoing review of the Customs and Excise Management Act (CEMA) to enable the service discharge its function optimally.

The theme of this year’s annual Comptroller-General’s conference is “Border Divide, Customs Connects.”