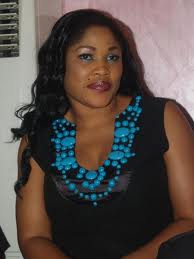 Information posted on goldmyne.tv website has revealed that Nollywood actress, Bisi Ibidapo Obe is now a proud mother of a bouncing baby girl. The bundle of joy, they said, arrived early this morning.

For those who might be getting angry and wondering: of what use is this piece of information to Nigerians, some months ago news of the Nollywood actress’ pregnancy hit the media waves and that the man allegedly responsible – a former member of the National Assembly – has refused to accept the pregnancy.

The person in question, Honorable Dino Melaye, happened to be one of the most vibrant lawmakers in the House of Representatives during his time at the National Assembly. Melaye also has a history of human rights activism and social work.

Therefore, the allegations of his impregnating an actress and then denying any such thing pose a significant threat to his reputation, especially if found to be true eventually. Dino Melaye is a married man, and his wife has taken his side in the controversy that surrounded the pregnancy story.

So, fingers crossed, now that the bundle of joy has arrived, Nigerians would, naturally expect to hear more on this emerging Nollywood episode!