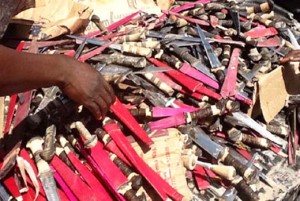 Joint Military Operation overseeing security of Mubi, Adamawa State has uncovered another bomb manufacturing factory located in a rice farm, bringing to three the number of such factories uncovered by the security operatives.

The Brigade Commander, 23 Armoured Brigade, Nigerian Army Yola, Brigadier- General John Nwaoga while conducting newsmen round the premises of the building housing the bomb factory yesterday said, the discovery followed the arrest of one Mohammed Ibrahim at a road block in the area.

According to him, Ibrahim was nabbed at a checkpoint with over N3 million and 200 dollars and a pistol stuffed in his Honda salon car with number plate CF 26 SMK.

Nwaoga stated that the arrest of the suspect and his subsequent interrogation led security operatives to discover the building along the Mubi – Maiha road in the outskirt of the town.
Items discovered in the building include police uniforms, locally made grenades, charms, bags of fertilizers, gas cylinders, thousands of readymade cans of Improvised Explosive Devices, IEDs, remote control devices of different makes, car batteries and various sizes of wires, among other items.

Nwaoga expressed worry over what he described as frivolous allegations against security operatives saying that the culprits were not helping the Nigerians to live in peace and harmony.

According to him, the military was ever ready to deal with the terrorists, but added that the war could only be won with the co-operation of the communities who are expected to identify criminals and strange faces in their domains.