Luiz Felipe Scolari has been confirmed as the new coach of Brazil following the sack of Mano Menezes last week after failing to meet expectations – Brazil were knocked out of the 2011 Copa America by Paraguay on penalties, before losing to Mexico in the 2012 Olympics final. 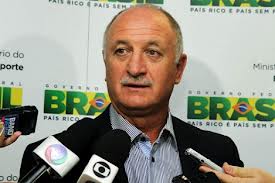 And the former Chelsea boss, who coached his country between 2001 and 2002, was installed as the early favourite to take over alongside Santos’ Muricy Ramalho.

During his first reign in charge of his country, Scolari won the 2002 World Cup, beating Germany 3-0 in the final, and is targeting another triumph when Brazil host the tournament in 2014.

“We have an obligation to win the World Cup,” he told reporters at his unveiling.

“We are not the favourites to win it now, but we aim to become favourites as we are starting to see the results of our hard work.

“If a national team that have won five World Cups is organising the World Cup, you cannot think about just making it to the final or semi-finals.”

Meanwhile, another former coach, Carlos Alberto Parreira, is returning to the fold as team director, and is proud to have been selected for the role.

Ozo To Start His Radio Show On Brila FM (Video)